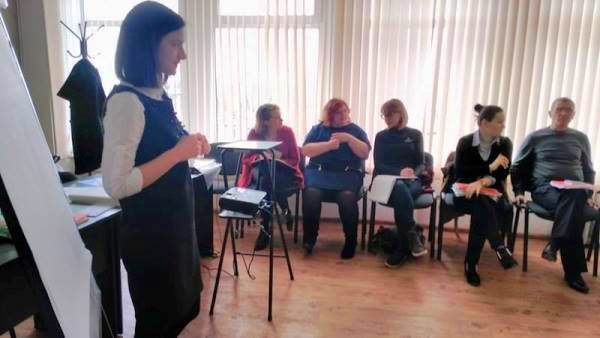 Training for CMHC team from Cahul

SOMATO Association, based in city Balti, held a two-days training for members of Community Mental Health Center team in Cahul, setting off a special session of training in mental health area, which will be conducted in several parts of the country. The two-days training in Cahul was conducted by SOMATO in partnership with the Office of the High Commissioner for Human Rights and the Institute 'Trimbos-Moldova "(Netherlands). Beneficiaries of the training were instructed on subjects related to non-discriminatory communication and rights of persons with disabilities. Action has set the objective of better understanding the concepts of stigma, stereotypes and discrimination. Beneficiaries have learned stipulations of the Convention on the Rights of Persons with Disabilities, being trained how to apply them more effectively in everyday life.

The national consultant in the Office for Human Rights, Cornelia Adeola says that the correct approach, in terms of human rights is the only way towards a fair and non-discriminatory society and stereotypes cause conflicts and discrimination.

President of the SOMATO Association, Jana Chihai said that mental health service reforms taking place in Moldova, involve the need to change the attitude towards people with mental illness among employees of community centers.

"It is very important that in addition to medical and social services they provide, that the employees have an equitable and non-discriminatory attitude and interact with beneficiaries in framework of respecting human rights," underlined Jana Chihai.

This training is held within the project “Capacity building of groups of persons with psycho-social and intellectual disabilities for better participation to decision making and effective inclusion in society”. The program is funded by the Embassy of Finland in Bucharest.
Previously, SOMATO performed in the same project, a series of trainings for the beneficiaries. Each month carries thematic "peer to peer" meetings in mental health centers in Cimislia, Soroca, and Cahul.

Previous media →
The rights of persons with disabilities promoted in MHC