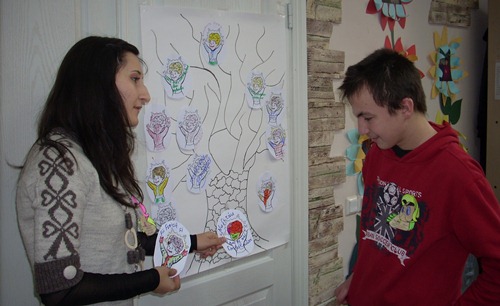 Social assistants and psychologists from Mental Health Center „SOMATO” from Balti, students from Psychology Department from Balti State University “Alecu Russo”, as well as about 30 beneficiaries from the Center “SOMATO” and Center for children with mental disabilities “DANKO” from Balti celebrated on October 10 Mental Health Day within a fun and cognitive activity. “Our psychologists told beneficiaries about the importance of mental health, about the necessity to keep a healthy lifestyle and how beneficiaries are assisted to have a better health”, said Corina Popa, director of the Center “SOMATO”. Beneficiaries were involved in competitions on mental health subjects, recited poems, sang songs and recalled sayings about mental health.
At the end of the event the most active beneficiaries were handed diplomas.

Mental Health Center “SOMATO” from Balti began its activity in 2000 and was the first institution of this kind in the Republic of Moldova. Center “Danko” was opened in Balti on October 6, 2009 and provides services for children and teenagers with severe mixed disabilities.

According to official data in Balti municiplality there are over 3000 people with mental illness, including over 200 children and about 190 adolescents.