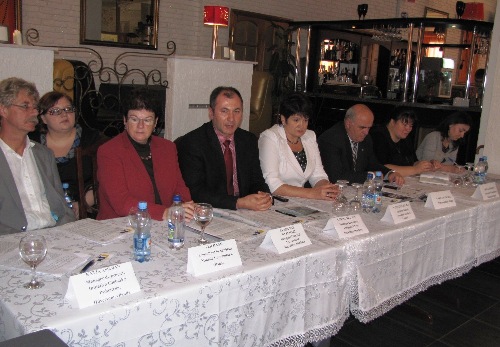 Moreover, in this project 80 people with mental illness from Balti benefited of assistance at home. There were organized two cycles of trainings for people involved in project implementation, there was also organized a study visit to Holland.


During the service opening ceremony, the president of the Association SOMATO, Jana Chihai, mentioned that among the biggest difficulties people with mental illness face is the lack of conditions for independent and free living.

“Sheltered housing” service is a good opportunity for our beneficiaries to live an independent life, to integrate into society and to decide by themselves what is most important in their everyday life”, said Jana Chihai.

“The fact that local government is one of the project partners reveals its attitude towards social problems from the locality” said Vasili Panciuk, the mayor of Balti.

Panciuk mentioned that the project implemented by the Association SOMATO gives us the opportunity “to manifest a civilized attitude in the process of rehabilitation and integration of people who were less lucky”.

According to the official data, in Balti there are more than three thousand people with mental illness, including over 200 children and 190 teenagers.


Project “Developing and testing sheltered housing for people with mental illness in Moldova” was launched at the end of 2008 and is to be finished by the end of 2011. The budget of the program is about 295 000 Euro, of which about 220 000 Euro were allocated by the Delegation of European Union to Moldova; the co-funders of the project are Mental Health Initiative/Open Society Institute (Hungary) and Balti city hall. The project is implemented by Global Initiative on Psychiatry, Hilversum (Holland) and Association SOMATO from Balti.


ABOUT SHELTERED HOUSING IN BALTI

Within “Sheltered Housing” Service there were opened four sheltered housings for 16 people with mental health problems. The housings were allocated by Balti city hall. They were renovated and furnished from the funds offered by foreign donors (see more details in press-release). The housings have all conditions necessary for independent living. The placement of beneficiates in sheltered housings is accompanied by an individualized care plan, which goal is to offer real opportunities for social inclusion.

➲ The second sheltered housing for people with mental illness was opened on May 27, 2011. It is a house in Balti, situated at the street “31 August”, 127 with the total surface of around 60 m². The building (three rooms, canteen and a bathroom) is furnished and has all conditions necessary for decent living. Five men with mental illness live here.

➲ The third sheltered housing is opened on September 9, 2011. It is a part of the private house (situated at the district “Pamanteni”) – a canteen, a bathroom and a room of about 40 m². Three men with mental illness will live here.

The 16 people with mental illness will live an independent life in these four apartments. They will go to work, will pay the bills, will prepare food and will receive guests. However, their living will be monitored by specialists from Mental Health Center “SOMATO”, administrated by the Association with the same name.
Previous media →
Study Visit to Bosnia and Herzegovina