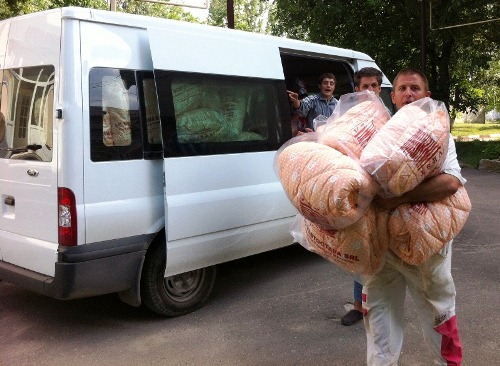 90 blankets were donated by Dutch organization to Psycho-neurological boarding house from Balti. Organization “MacroMicro” from the Netherlands managed to raise 1520 Euro in the result of fundraising campaign through social networks. The campaign was organized by Fer Haak, one of the foreign experts, who assisted Association SOMATO during the project for launching first sheltered housings for people with mental health problems in Republic of Moldova.
Director of psycho-neurological Internat from Balti, Vasile Petic, said that the gesture by Dutch people had impressed the workers and beneficiaries from the institution.

“We would like to thank our Dutch partners for collecting the funds necessary to procure blankets for our beneficiaries”, said Vasile Petic.

We would like to mention that  in the end of the last year Dutch organization “MacroMicro” transmitted the Psycho-neurological Internat from Balti about 9 tons of furniture (more than 250 articles of furniture) worth more than five thousand Euro.

Previous media →
“Come with me, school is for you too” – Campaign